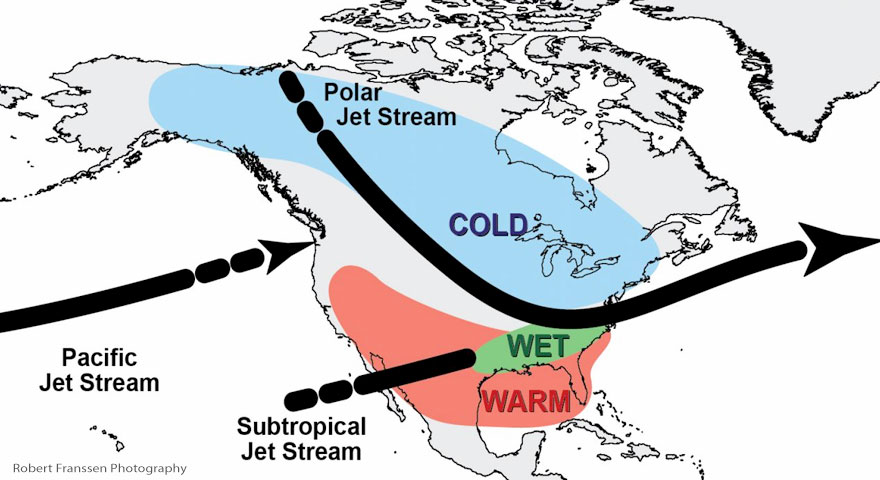 The El Niño-Southern Oscillation (ENSO) is a recurring climate pattern involving changes in the temperature of waters in the central and eastern tropical Pacific Ocean. On periods ranging from about three to seven years, the surface waters across a large swath of the tropical Pacific Ocean warm or cool by anywhere from 1°C to 3°C, compared to normal.

This oscillating warming and cooling pattern, referred to as the ENSO cycle, directly affects rainfall distribution in the tropics and can have a strong influence on weather across the United States and other parts of the world. El Niño and La Niña are the extreme phases of the ENSO cycle; between these two phases is a third phase called ENSO-neutral.

A warming of the ocean surface, or above-average sea surface temperatures (SST), in the central and eastern tropical Pacific Ocean. Over Indonesia, rainfall tends to become reduced while rainfall increases over the central and eastern tropical Pacific Ocean. The low-level surface winds, which normally blow from east to west along the equator (“easterly winds”), instead weaken or, in some cases, start blowing the other direction (from west to east or “westerly winds”). In general, the warmer the ocean temperature anomalies, the stronger the El Niño (and vice-versa).

Neither El Niño or La Niña. Often tropical Pacific SSTs are generally close to average. However, there are some instances when the ocean can look like it is in an El Niño or La Niña state, but the atmosphere is not playing along (or vice versa).

ENSO is one of the most important climate phenomena on Earth due to its ability to change the global atmospheric circulation, which in turn, influences temperature and precipitation across the globe. We also focus on ENSO because we can often predict its arrival many seasons in advance of its strongest impacts on weather and climate.

So, by now, you might have noticed that while “ENSO” is a nice catchall acronym for all three states, that acronym doesn’t actually have the word La Niña in it. Why is that? Well, that is a fluke of history. Before La Niña was even recognized, South American fisherman noticed the warm up of coastal waters occurred every so often around Christmas. They referred to the warming as “El Niño,” (niño being Spanish for a boy child) in connection with the Christmas holiday.

So although predictions are still only that, predictions. We all hope that the initial call of a good ski season still comes to pass so we can all enjoy our favorite past time in Park City — skiing and snowboarding on the best powder in the West!

Information in this article is courtesy of climate.gov – 1/2/2018